Tennis Tayside has a new President – Rhona Alston of Montrose Tennis Club.  Rhona took over as President from Colin Allison, who stood down after seven successful years in the post, at the recent TT AGM held in David Lloyd’s Monifeith.  Colin was presented with a gift from the TT Board and was applauded for his work during his tenure with special mention going to his organisation of ‘branded signage’ for all TT clubs and being the driving force behind the Dundee Tennis Initiative.

One of the first duties for our new President was to present Marcus McLaren with his Most Promising Junior Award.

We wish Rhona all the best in her new post. 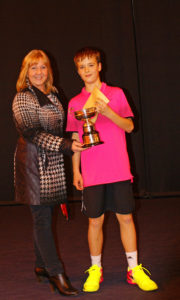