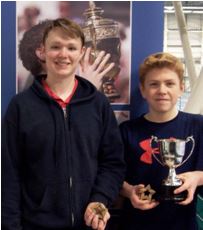 Our congratulations go to Jed Alexander from Dundee who won the Boys 14 &  Under Scottish Indoor Championship on the first weekend of 2015.

The third year pupil at Menzieshill High School overcame a bout of illness to win his first round, and then did not drop a single set en route to the final.

There he met Aberdeen’s Ross Martin, and lost the first set 6-2 to his big-hitting opponent.  Jed then levelled the match with a 6-4 win in the second set, and then clinched the title 10-6 in a tie-break decider.  Well done Jed!