£23400 GRANT FOR CREATION OF A MINI TENNIS ZONE 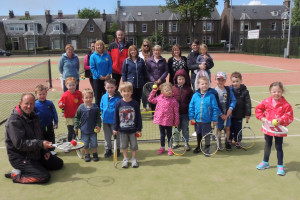 Montrose Tennis Club is delighted by the faith shown by announcing a £23400 grant award from sportscotland – the national agency for sport.

This investment, which is a 50 % grant of the money required to create two mini red courts, will complement the original six LTA standard courts already with upgraded surfaces and all floodlit.  The grant ensures that the five year development plan to create a tennis centre of excellence is very much on track.  The further money required has been fundraised by club members and the club’s sinking fund, as well as grants from Montrose Common Good, Aberbothock Skea Trust and Colin Grant Trust and any additional donations from local business would be appreciated too.  The court build will commence after the club championships later in August.

At the club, there is presently a great demand for tots tennis while the under 10 age groups continue to grow and we will now have an area to develop both their skills and play appropriate tournaments on.  This new area will also be ideal for disability groups where they can focus in a smaller area and enjoy learning new eye to ball skills as well as holding tournaments.  There is a definite spin-off from high profile tennis influenced by Andy Murray.

Welcoming the funding  Montrose Tennis Club’s secretary, Rhona Alston said “This development will continue to help Montrose Tennis Club, widen accessibility to the sport of tennis within the community and increase membership to the club.  Now with the aid of full time coach Graeme Walker and Performance coach Kris Soutar plus invited coaches, there are programmes for all ages, ranging from three-year-olds to programmes for school pupils right up to veterans”.

Mrs Alston continued: “Significantly, Montrose is well and truly on the tennis map, with three competing ladies teams, three men’s teams, four mixed doubles teams and the only club in Tayside to be playing out four junior teams as well as competing in junior Aegon fixtures all over Tayside and Aberdeenshire”.

Last year was the first time the club were able to hold an official  LTA tournament, reinstating the famous old “North Angus Tournament” now sponsored by Doug & Sandra Cree from D C Lighting Services Ltd,  and it is on again this year 26th, 27th and 28th June.  Entries are now open on  LTA Tennis Scotland website and we are hopeful of  attracting even more entries.

This is a wonderful attribute for the area of Angus; Montrose is fast becoming a hub for sporting excellence and the tennis club is very much a part of that.

The committee is extremely grateful for the support from sportscotland, which has recognised the significant progress the club has made in forging closer ties with local schools, Angus Council and especially Montrose and Brechin sports coordinators, Tennis Tayside and Tennis Scotland.

The club could not be where it is now without a very active committee, many sponsors and trusts which have supported the club and, of course, the members, including both junior and adults team players who are being encouraged to now play in more advanced leagues than ever previously in the club’s history.”

Stewart Harris, Chief Executive of sportscotland said:  “At sportscotland we want to ensure that there are more and better opportunities for people to take part in sport in Scotland, whatever their level, and the addition of these two new mini courts will play an important part in introducing more young children to tennis in the Montrose area.

“Importantly, the club has established strong links with schools and sports coordinators ensuring that when children are introduced to tennis, the opportunities exist for them to develop their potential within a sporting system right at the heart of their local community.”